The Transgender District launched their 3-part screening series in mid-August. Their work is near and dear to our hearts, so QWOCMAP was excited to collaborate with this Beloved Community Partner. We were also thrilled because our QWOCMAP Filmmakers are in different workshops, so this was the first time that these nonbinary, gender nonconforming, and transgender BIPOC filmmakers had seen each other’s films.

Summer of Joy
This screening and the filmmaker Q&A were beautifully and loving moderated by Jupiter Peraza on August 27th. She brought us all to tears along with films that included:
My Beautiful Resistance by Penny Baldado
Home by Gato Rodriguez
I Am Kavi by Kavi Dhan
La Entrevista by Bersath Verdugo Dominguez
The Wink & The Pucker by Ami Puri
Azúcar by Luna Merbruja
Food with Friends by Fiza Jihan & Mina Halim
Femme Queen Chronicles by Ahya Simone

You can watch the Summer of Joy Filmmaker Q&A here:

Summer of Rebirth
On September 10, Juniper Yun moderated this screening and filmmaker Q&A with joy, humor, and no small bit of sparkle for these films:

Summer of Resilience
This September 24 screening will be hosted once again by Juniper Yun. Films include: 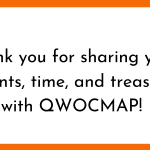 Thank You to Board Member Alisha Diego KlattQWOCMAP News