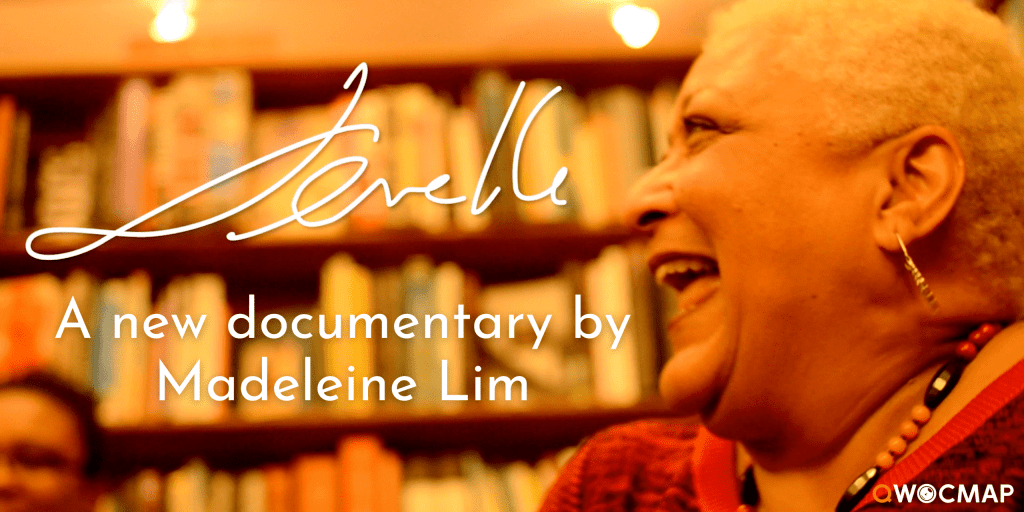 A close up photo of Jewelle Gomez laughing and looking across the room. Jewelle is a Black Native Femme elder with medium brown skin and close-cropped white curly hair, wearing a red sweater, a black and red beaded necklace, and dangly silver earrings. Behind her are bookshelves lit by warm yellow light. Jewelle’s signature is scrawled across the image in white text, with printed text below that reads, “A new documentary by Madeleine Lim.” The QWOCMAP logo is in the bottom right corner.

You can still contribute to the  For The Love of Jewelle fundraising campaign to finish the new documentary about Jewelle Gomez by award-winning filmmaker and QWOCMAP founder, Madeleine Lim.

The new JEWELLE documentary needs funds to finish visual effects, color correction, music score, sound design & mix, archival releases, and the film print so that it can world premiere in 2022!

Jewelle Gomez: before Buffy, before Twilight, before Octavia Butler’s Fledgling, before “The Strain” and “The Passage”, there was the prescient novel The Gilda Stories, which is “vitally important for the development of a generation of dreamers engaged in radical imagination. The novel has filled the desires of oppressed and marginalized peoples for stories of the fantastic…breathe out visionary communities of resistance.” With a vampire who takes blood to live and in exchange gives humans dreams for the future, the novel fundamentally reimagines vampire mythology.

Jewelle Gomez: whose 3-play cycle starts with Waiting for Giovanni, which imagines James Baldwin in the late 50s when writing the gay novel he’s told will ruin his career. It continues with Leaving The Blues, “a wonderful gift…[that] introduced us to the incomparable Alberta Hunter” a lesbian blues singer who experienced a career resurgence in her 80s. These plays reclaim queer Black ancestors, artists who have shaped our understanding of the world and history, much like Jewelle Gomez herself.

Jewelle Gomez: Intersectional feminist of color long before the term was coined in legal, sociological, or movement contexts. Who had “the good fortune to grow up among many movements from the 1960s to today.”  Whose lush, sensuous prose and deeply ethical humanity anticipates and speaks to movements from Line 3 and Standing Rock, to Black Lives Matter and #MeToo. Who co-founded organizations like GLAAD, the national media monitoring organization that examines defamatory coverage and representation of LGBT people in media and the entertainment industry. From her co-founding of the Astraea Lesbian Foundation for Justice and leadership at the local San Francisco Horizons Foundation, Gomez has continued to fight for LGBT people. She and her wife, Dr. Diane Sabin, were among the lead the plaintiffs in the winning case against California’s Prop 8, leading to U.S. marriage equality.

As a donor, you can share in the love of Jewelle Gomez as this film celebrates her life and prescient legacy.  Please, join in For The Love of Jewelle!